Farm Data Language or FDL for short is the query language used in dbWatch to find information about objects. FDL is formerly known as DBWQL.

The best way to get familiar with FDL is by using the FDL console, accessible as a tab on the left side of the dbWatch Monitor. The console consists of 4 main areas and a command bar.

By default, the FDL console operates in “Continuous”, which means that queries are executed on the fly as you type. You can change this to “Triggered” on the “Execution” menu. Then queries will only be executed when you press “Ctrl + E”.

The start property is the property representing (all) the dbWatch Server(s). 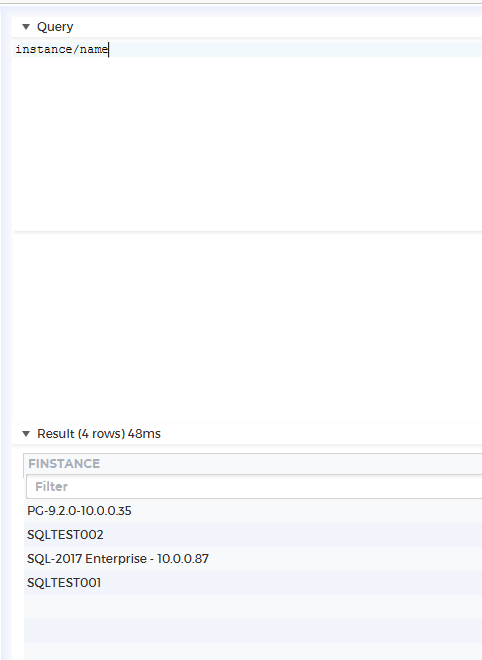 If you add a “/” and hit the tab key, you will see all the entities and values that are available from the instances. Going back to the example below, I used instance instead of the previously written query Instance/name. There are two main reasons for doing so: 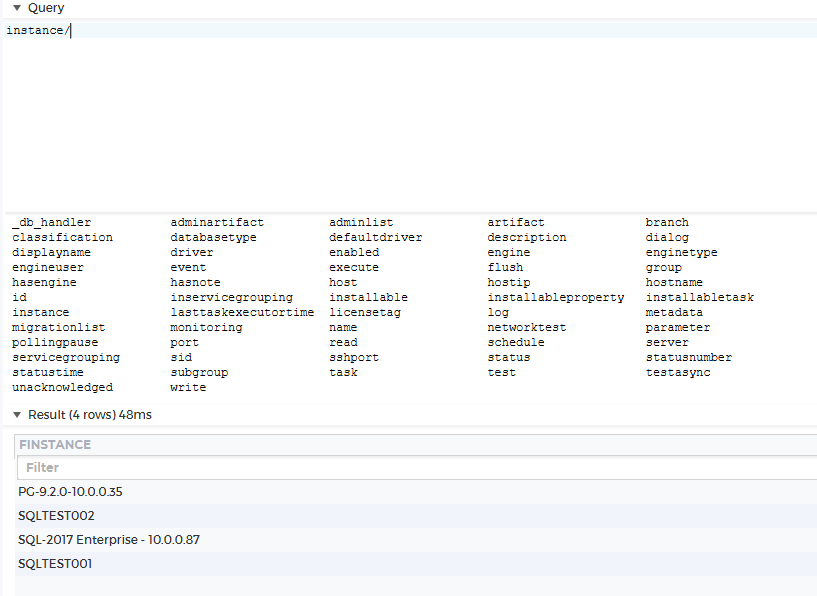 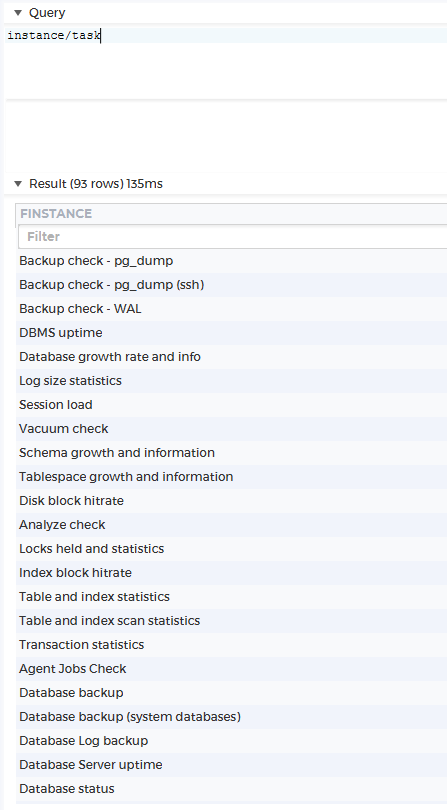 As you will observe, the default is that only the last “column” in the query is shown in the result set (in this case task is shown, but not instance). In order to output other “columns”, you can add curly brackets “{}” to the property you want to show. Don’t mind the arrows first. This will be discussed in depth in Anchors

As you can see, the last column (task in this case) is always shown. You don’t need to add a {} at the trailing column (as seen above) but for future edits of your FDL query, it makes it easier to append additional columns. Inside the curly brackets, you can rename any column using aliases. Similar to any query, all alphanumeric characters inside the open and closed brackets will substitute as their column name.

In the previous example, we queried for the list of tasks of all registered instances. If we want the tasks of only some of the instances, we can filter on properties of the instances. For example, if we want only PostgreSQL instances that have a name that contains “2.0” in between its name, we could write as follows: What if you want to list several properties from a property? Then we use an anchor. An anchor is defined by “->” and accessed by “$”.

For example, if we want to list the name and status for all alerts on a specific instance we could do the following As you can see above, we place all the task (of type alert) belonging to the instance called “SQLTEST02” in an anchor called t, then we can use $t later in the query to reference the task name and status. As seen in previous sections, we also used i as our anchor. It shows how we can use any letter or string of characters as our anchors. For more simplicity, it’s better to avoid very long strings of character, as anchors are supposed to make it easier to refer to a property.

The following operators are available in the FDL language.

Fetch the name of all instances of with a total_session_count above 10 and that are of database type oracle or SQL server.

The Debug console can render the query results based on hashtags in the query. These hashtags work as a hint to the GUI and are not part of the FDL language. They will currently have no effect on queries executed in other contexts (f.ex through the CLI.)

Represented as a string property can look like this;