All nodes in the cluster now share the same dbWatch engine schema.

Adding a RAC to dbWatch

RAC nodes are added much the same way as normal instances. You have to register each node in turn.

Add the first RAC node by using the normal “Add instance” wizard. After entering the connection info for the instance, dbWatch will detect that this instance is part of a RAC and displays information similar to the following:

Continue and register the instance as normal.

Then, do the same for the second instance (be sure to register all RAC instances in the same group). dbWatch will again detect that this node is part of a RAC, and it now knows that another instance is already registered.

When you get to the view where you define the user and schema, select the same values as for the first instance. 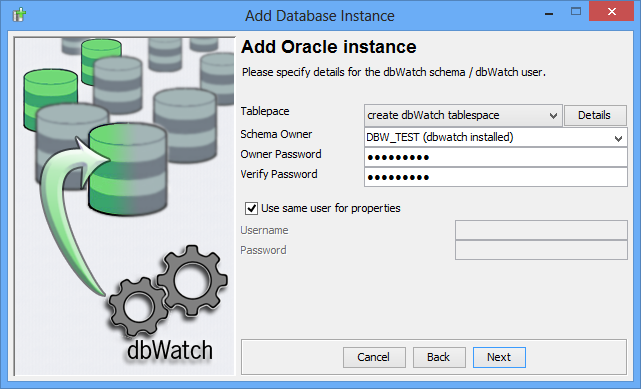 dbWatch will detect that the user already exists, this is as it should be, click “Yes”.

Next, dbWatch will detect that schema already exists, this is also as it should be, click “Yes”.

Finish the installation as normal.

You will now see that dbWatch has created a node in the monitoring tree to represent the RAC (RAC112G), and both instances are added under this node.

When you view the Tasks/Alerts for an instance, you will notice that some are marked with the RAC name and some are not. The ones marked with the RAC name are the so called “database tasks” and that are relevant to the RAC as a whole. If a database Alert gives a warning/alarm, this status will appear on all the nodes in the RAC. If an instance Alert gives a warning/alarm it will appear only for that instance. 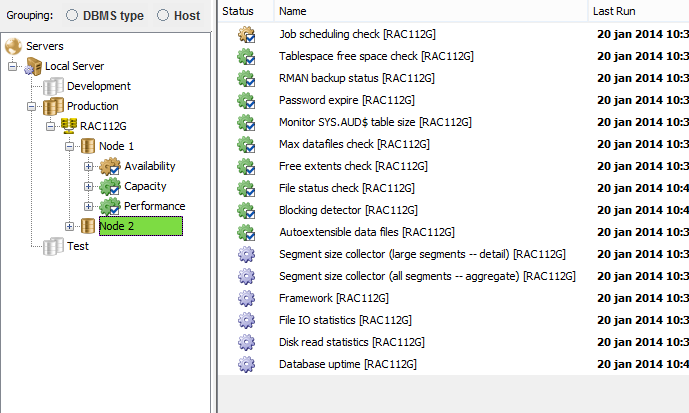 By default status propagation for a RAC is the same as for a group. If one instance has an warning/alarm/lost connection, that status will appear as the status for the RAC.

Currently this can be changed by editing the server_configuration.xml file directly (this requires a dbWatch Server restart.)

To do this, stop the dbWatch Server and open the server_configuration.xml file in a text editor. Locate the tag with an “id” that corresponds to the RAC name, then change the alarm-nodes, lost-connection-nodes and warning-nodes as desired. Save and restart the dbWatch Server.