Connect to the server with the monitor with a privileged user. The default admin user has the right privileges.
In the monitor select AD configuration in the menu. 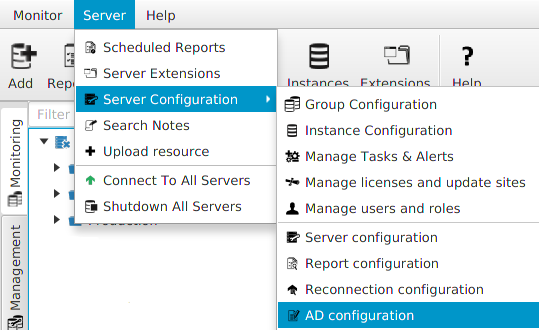 This opens the following dialog 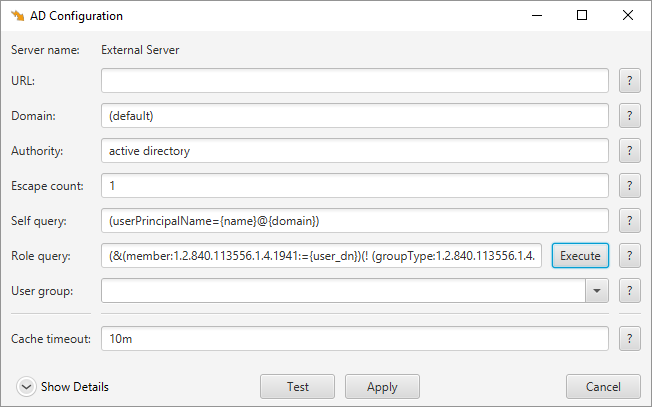 Clicking “Execute” on the role query, will cause dbWatch to populate the “User group” selector with the avaialable groups found on the AD server.
For debugging purposes, the log from both the “Execute” and “Test” buttons will be available by clicking on “Show details”.

The following process is applied to authenticate a user in dbWatch.

Available from dbWatch version 12.2 the user group has a few more possibilities.

When a user logs in with AD the system looks for roles matching the group memberships of the user. If any matching roles are
defined in dbWatch they are granted to the user for as long as the authentication is cached.

Any AD groups not connected to a dbWatch role will be remembered by dbWatch and will appear in the operator dialog as sugested roles. These are marked with gray text.

After logging in with the user “user1” which is mamber of the two groups “CN=Domain Users,CN=Users” and “CN=dbWatchUsers,CN=Users” the operator dialog looks like this 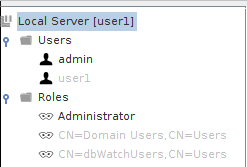 It is then possible to select one of the roles and add grants to it.

In some configurations the query used to determine the roles of a user can be slow. The default query
is recursive and returns all groups the user is a member of. Including indirect memberships.

If you experience a performance hit on the AD server you can set the role-query to (&(objectCategory=group)(member={user_dn}))
This query only asks for direct group memberships, but is much faster. Increasing the cache timeout will also decrease the load on the AD server.